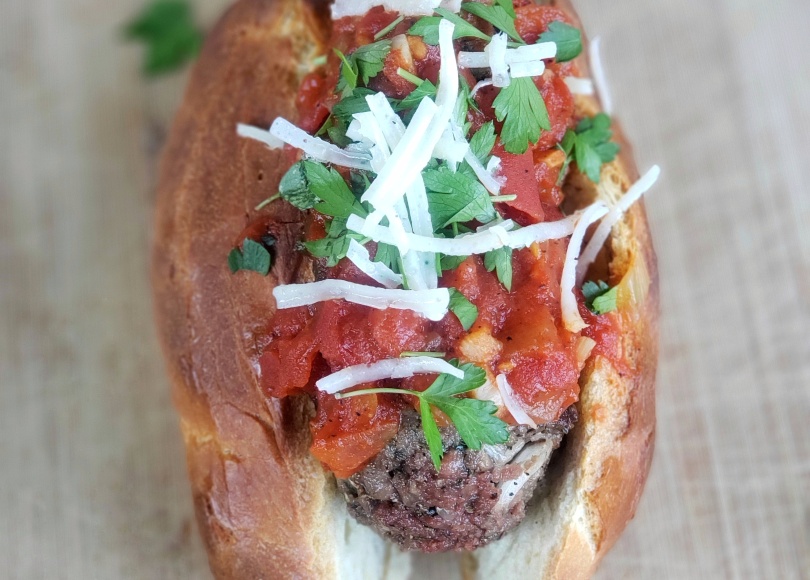 Today we’re making a copycat recipe of the Impossible Meatball Sub, which has been part of the Food and Wine Festival at California Adventure for the past few years!

I’m so excited to share my version of this sub with you so that you can make it at home. I hope you enjoy! Please tag me on Instagram if you make it and let me know what you think!

This year’s Food and Wine Festival was tragically cut short, but there is a chance that the festival will be extended once the park reopens! Disneyland filed permits to keep the food stands in place until September I believe, so they have the option to extend it if they want to.

There’s still no word on when Disneyland will reopen. We’re currently in Phase 2 of California Governor Newsom’s reopening plan, with theme parks being part of Phase 3. But it’s not determined when Phase 3 will start – it could start as early as June, though! So it is feasible that Disneyland could have a July opening date to match Walt Disney World, which will open on July 11 (Magic Kingdom and Animal Kingdom) and July 15 (Epcot and Hollywood Studios). This is much later than some other Orlando parks; for example, Universal Orlando is opening already on June 5.

California is generally on a later reopening schedule than Florida, but only time will tell! I’ll be sure to post on Instagram as soon as we start getting news about Disneyland here in Anaheim opening. If you want to make sure you don’t miss any updates about what’s happening in Walt Disney World in Orlando, make sure you’re following @vegandisneyworld.

And now, on to the recipe!

I also made a video of this recipe, so here it is if you prefer to watch it being demonstrated as well!

Here are the components of the recipe:

Head over to Mary’s Test Kitchen for that recipe! Just make sure that you start it well ahead of time, as the dough needs to rest/rise several times. Also, be careful not to overbake it! With the sauce and meatballs cooking, along with making Instagram stories and Youtube footage and my tripod breaking at some point, I left my bread in the oven a little too long and it turned out a bit dark. I should have started checking it at 20 minutes after putting it into the oven. But I’m sure you can do better than I did!

The DCA version of this sub actually has a Mickey head seared into the side of the bread, it’s so adorable! I wanted to try to recreate that, but when my bread came out of the oven already a bit overdone, I decided not to try that. But they do sell custom bread stamps, on Etsy for example, or you could even try with a lighter! I can’t tell you if it would work, but please let me know how it goes if you try it!

If you have homemade bread, slice it down the top. Place as many meatballs as necessary, depending on the size of your bread and meatballs, to fill up the length of the sub. Spoon the marinara sauce on top, followed by the parsley and vegan mozzarella for garnish.

In the park, this is served with kettle chips as a side. I didn’t get any for my version, but feel free to add that to yours!

Finally, put on a video of Phat Cat Swinger playing at the Food and Wine Festival and enjoy your sub!

I hope you enjoy the recipe! Below are my other recent Disneyland Copycat Recipes if you’d like to try these out as well. Until next time, see ya real soon!