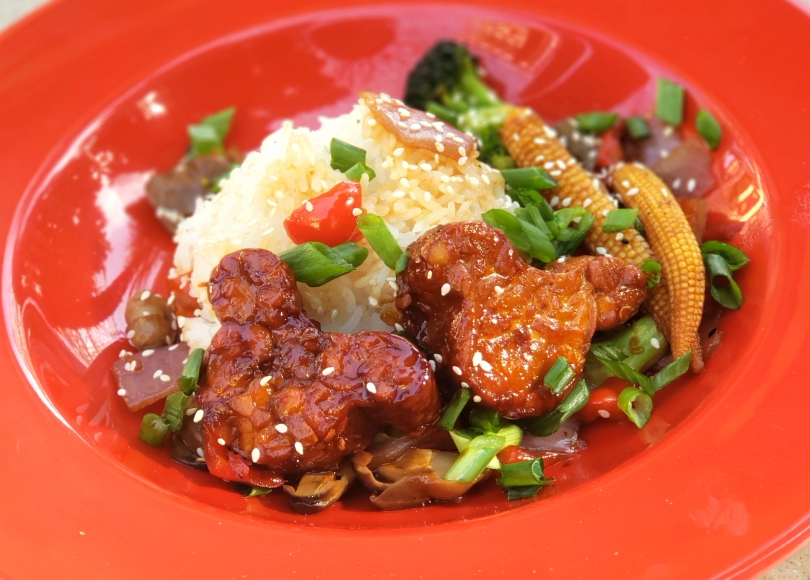 This Lunar New Year seasonal menu will be available from January 25 to February 17, 2019. I also have a video version of this guide on my Youtube channel, with some footage of the Lunar New Year processional, which has some fun characters like Mulan and Mushu, and the three little pigs.

At Paradise Garden Grill, they have this Vegan Orange Tempeh, which is clearly marked as vegan on the menu! And look at how cute it is that they’ve cut the tempeh into Mickey heads! 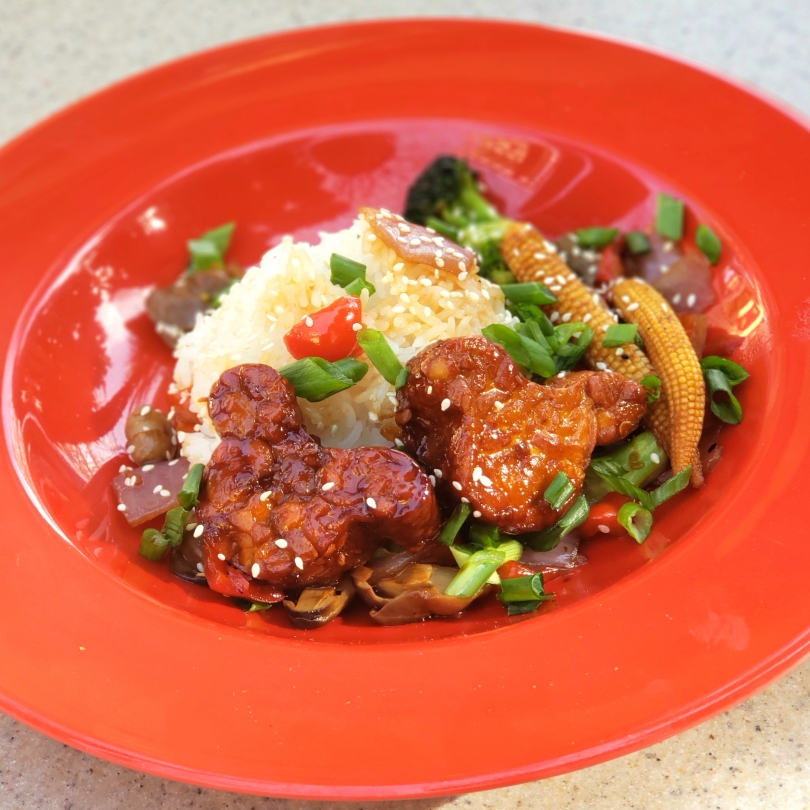 It was super delicious, but I will say it was a bit of a small portion size, so if you’re super hungry, I’d get another snack to go along with it. It would have been better with three Mickeys instead of two.

Also at Paradise Garden Grill, they have this Almond Milk Iced Tea. I checked with the chef to make sure that there was no dairy, honey, or other hidden animal products. He also showed me the ingredients list for the boba balls — they are vegan. It is the same brand as the ones that they use at Bing Bong’s, and you can see the photo of that ingredients list in the Bing Bong section of my most recent DCA update.

It was very sweet and almondy. It tasted like it had extra almond flavor in it, like it was not just almond milk, but had almond extract as flavoring as well.

At the Lucky Lantern Stand, they have a dish that is described as “Stir-Fried Vegetables & Pineapple with Soy Protein.” The chef told me that it is free of dairy, eggs, and honey, but that they are not marking it vegan because the sugar in the sauce may have been processed through bone char. If you’re unfamiliar with this issue, I suggest Bite Size Vegan’s video on this. If one were to be consistent in checking sugars, that would rule out eating in any restaurant, except maybe vegan restaurants, and it would mean that most, if not all, of the food at Disneyland is off limits. I do not find it possible or practicable (see the Vegan Society’s definition of veganism) to try to trace the origin of every sugar I encounter in restaurants, so for me, this dish falls within the definition of veganism, i.e., it’s a vegan dish:

The Soy Protein tasted and looked a lot like Oumph!, which is a plant based meat that they’ve had at several festivals at DCA in the past few years. It is delicious and I’m a huge fan!

They also have Lucky Buddha Beer at the Lucky Lantern stand, and Lucky Buddha is listed on Barnivore as vegan.

I did ask about the Vietnamese Iced Coffee, if they had any soy/almond/coconut etc. milk to put in it, but they said they only had cow’s milk.

Here they have a Winter Plum Blossom Gin Mule, which contains a plum wine, and I asked them what the brand was of that plum wine so that I could look it up on Barnivore, but they were not able to tell me. It was in a giant container and it must be filled off-site somewhere. Barnivore shows that most plum wines are vegan, most of the ones in their database anyway, so it is likely that this is vegan, but I wanted to be sure before I got one. I’m going to go back again and see if I can get them to tell me the brand of plum wine next time. If anyone reading this is able to find out, please let me know!

I knew it was a long shot on the Vegetable Egg Roll, but I asked anyway. Every once in a while I encounter an egg roll that doesn’t actually contain egg. But the chef showed me their list of allergens, and there is indeed egg in that Vegetable Egg Roll.

I asked about the Orchid Spritz, to see if I could get more info about the Rose Popping Pearls, but they weren’t able to give me more info. I would imagine that they are the same brand that is being used everywhere else in the parks (the Tea Zone/Lollicup ones), and if that is the case, then the drink is vegan. Next time I go I’ll try to get more info.

At this stand, they have a Raspberry Lychee Chia Tea! I asked if there was any honey or other hidden animal products besides what is listed on the menu board — raspberry iced tea, chia seeds, and raspberry and mint garnish. The cast members called back to the prep area and confirmed that it is in fact vegan. 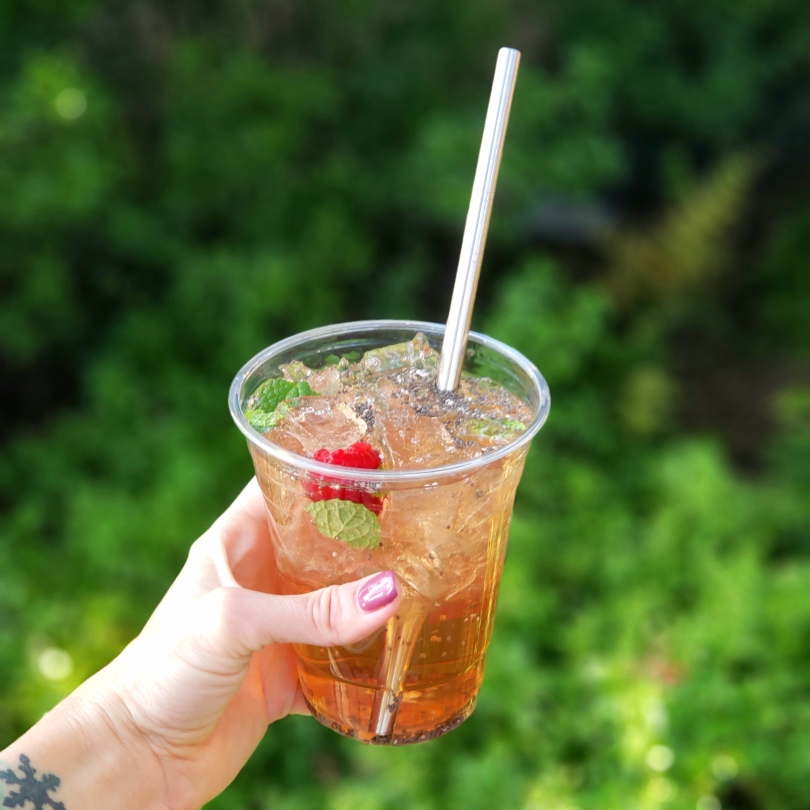 That’s all I have for you today! Please find me on Instagram (@happiestveganonearth) for daily updates. And tag me in your photos of the delicious foods you get at the Lunar New Year!