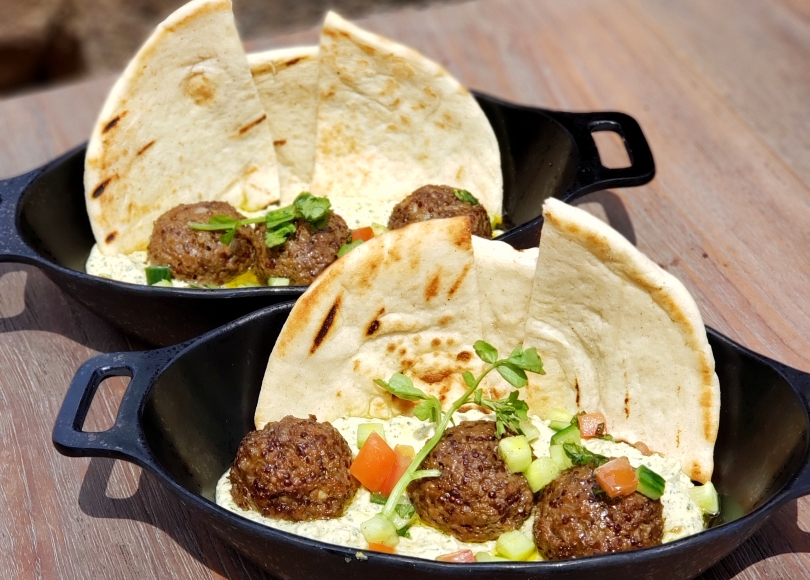 I also have a Youtube video guide to the vegan options in Galaxy’s Edge, if you prefer that format! Watch it here.

This is the main restaurant in Galaxy’s Edge where you can get full meals, while the other locations just have snacks. It is a counter service / quick service location, so there is no need to worry about a reservation. You order at the counter and then pick up your food and take it to a table. There are indoor and outdoor seating areas that are both really beautiful!

There are two really great vegan entrees; one on the lunch menu and one on the dinner menu. They are both made with Impossible Foods plant-based meat. There is some controversy around Impossible foods, so I always suggest that you read up on it a bit and decide for yourself about it. I recommend this article in particular. 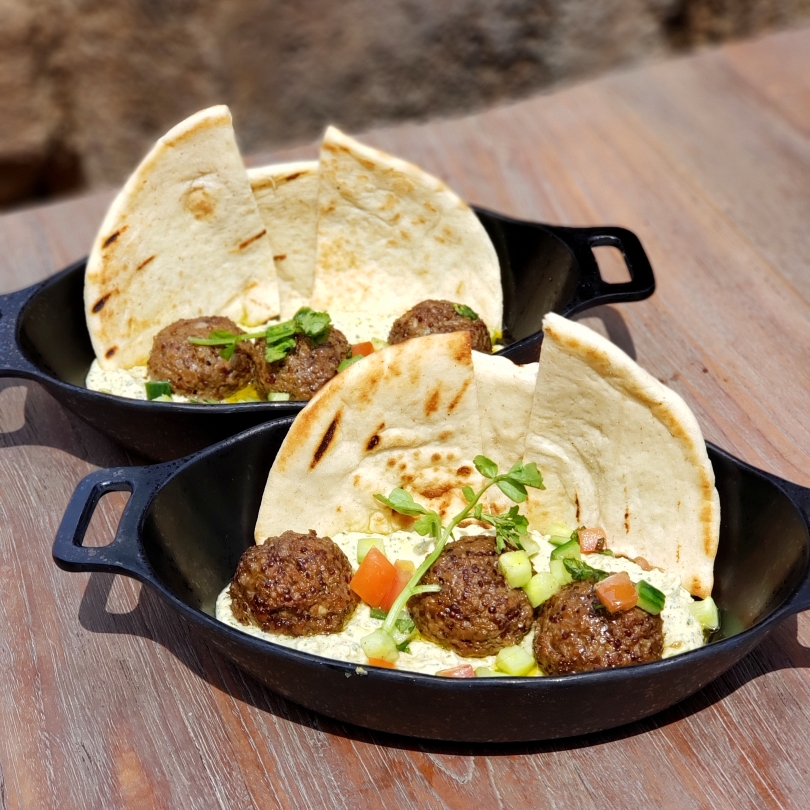 The chef at this location assured me that this dish, as well as the Ithorian Garden Loaf (Impossible Meatloaf) on the dinner menu are 100% vegan, and I checked specifically that the pita bread is free of dairy, eggs, and honey.

I absolutely loved this dish. The Impossible meatballs also have quinoa in them, and the hummus is really interesting. I’m not sure what kinds of herbs are in it, but it really does taste like something from another planet. It’s a pretty good portion size, very satisfying and flavorful. It might be a bit small if you have a larger appetite. This is one of my new favorite meals in the park, I’ll definitely be back for more soon! 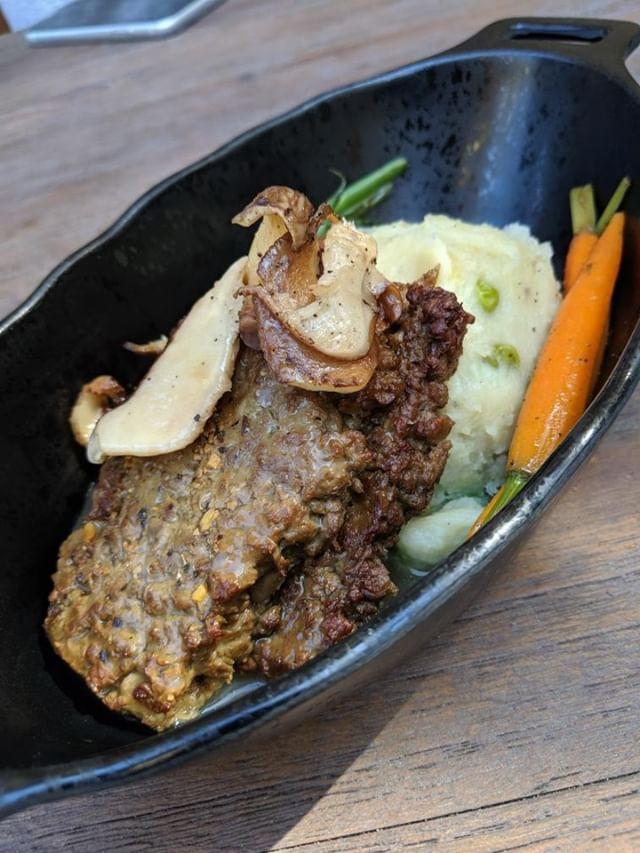 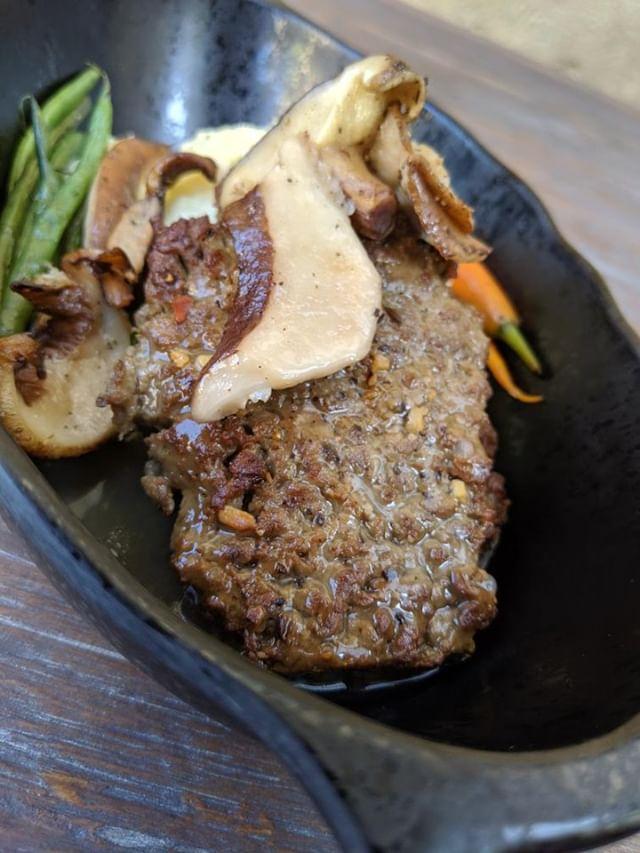 Many thanks to my homie Vegan Ven for his photos, videos, and review of this dish! Check out his Instagram for beautiful food photos around Southern California and especially for his genius menu hacks at Disneyland! 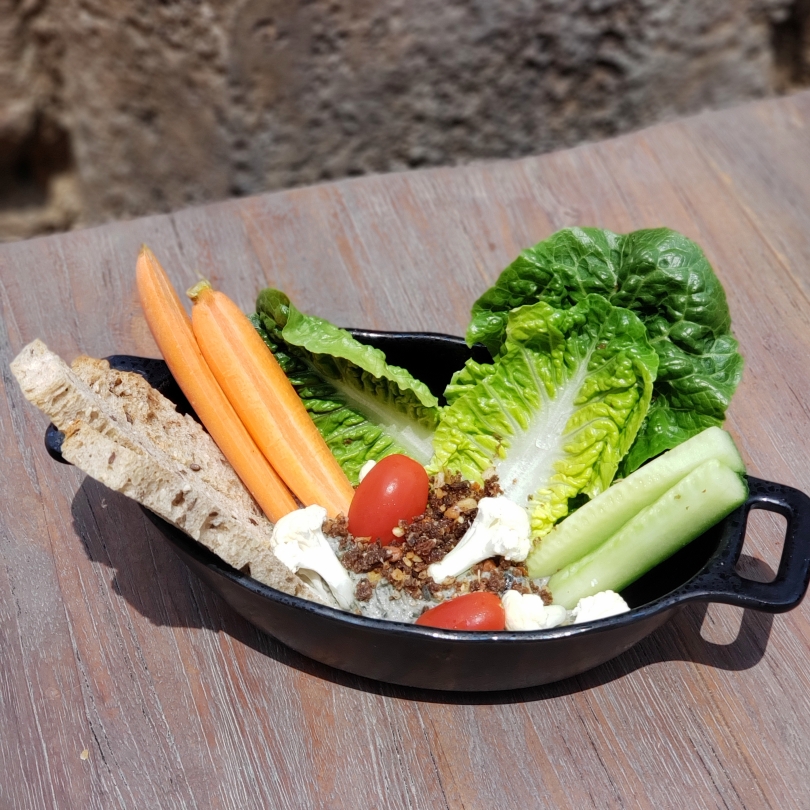 The chef told me that the multigrain chips and the bread crumbs in the edible soil do not contain any eggs, dairy, or honey, but that their packaging has a statement that they are made in a shared facility, which is a warning for people with severe allergies, but not a concern for vegans.

There are also three speciality drinks on the Docking Bay 7 menu:

I didn’t get any of these yet, but I do love Kombucha, so I’ll probably get one of those next time. If you have had any of them, I’d love to hear your review!

They also have the standard fountain beverages, coffee, etc.

On the breakfast menu here at Docking Bay 7, there isn’t much in the way of a full vegan breakfast. Unfortunately the Overnight Oats have yogurt (dairy) mixed in, and they are pre-made off site, so they can’t make you one without the yogurt. What they can do is make you a side of purple potatoes and pair that with a side of fruit. I’ll be getting that during my next morning reservation and I’ll let you know then how it is. Please tag me on Instagram and let me know how it went if you get this!

I love that they use real, reusable plates/bowls and utensils at this location! The bowls are great, they are actually quite heavy, almost like a cast iron skillet. And the metal sporks are so fun and well themed. Some people have said they are difficult to use left-handed, but my sister is left-handed and she didn’t seem to have a problem. 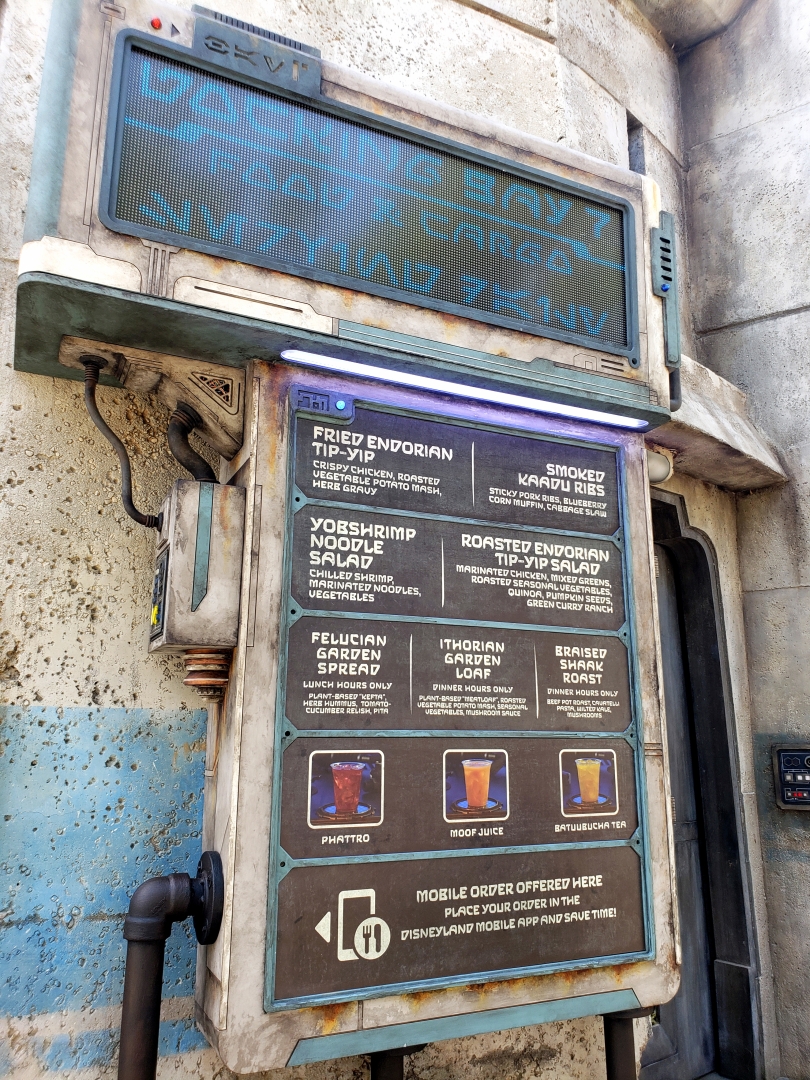 The Blue and Green Milks are clearly marked on the menu board as plant-based! They are a mix of rice and coconut milk. 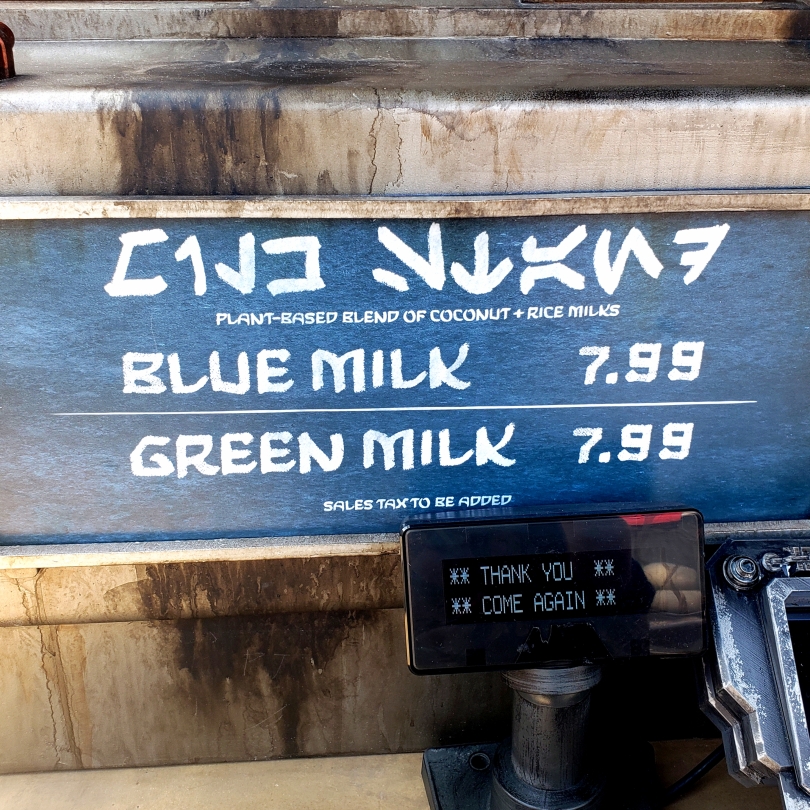 They are frozen, sort of a milkshake type consistency. 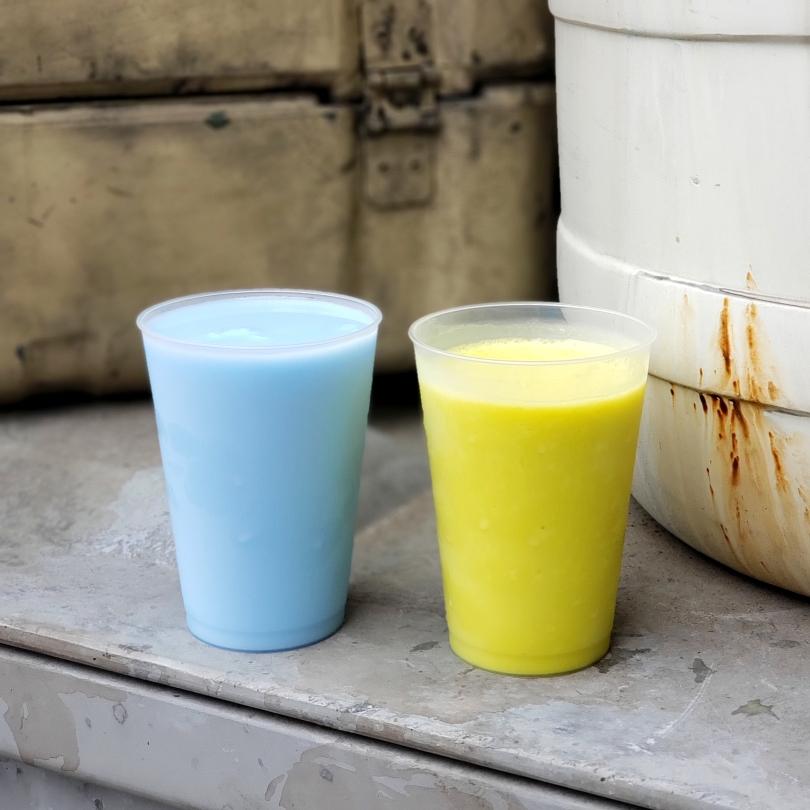 The Blue milk has a stronger coconut flavor, with some fruitiness. If you like Pina Coladas, it’s in the same ballpark. Super creamy and delicious.

The green milk has more of a citrus flavor. I think it is supposed to be Orange Blossom, so it has floral notes as well. It is less conventional than the blue milk, definitely more complex and exotic tasting, but I really loved it as well. I think the blue is a sure bet for anyone who likes coconut and fruity flavors, but I loved the green as well and I’ll be getting both of them in the future.

Here is the menu at Oga’s Cantina for your reference: 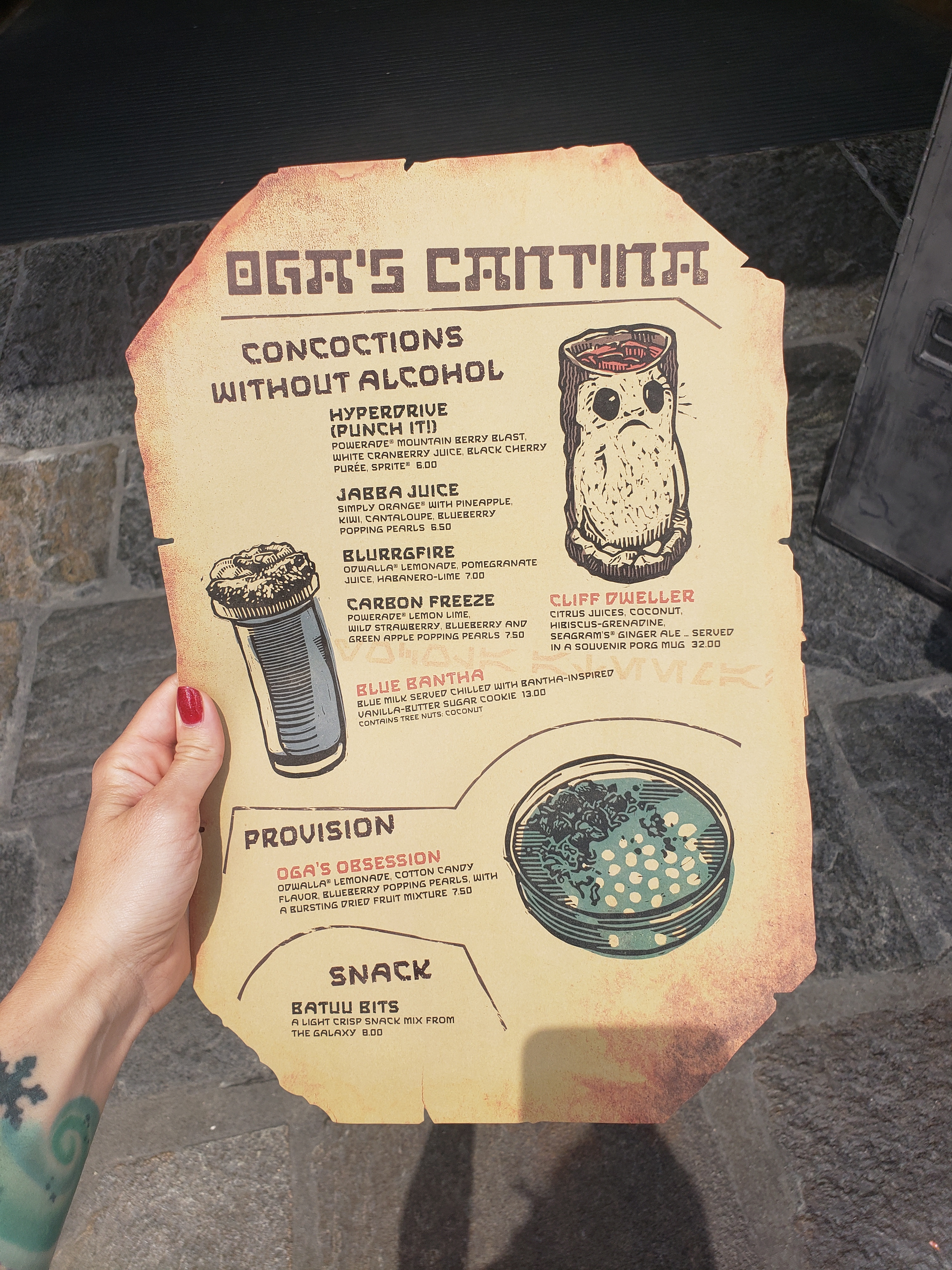 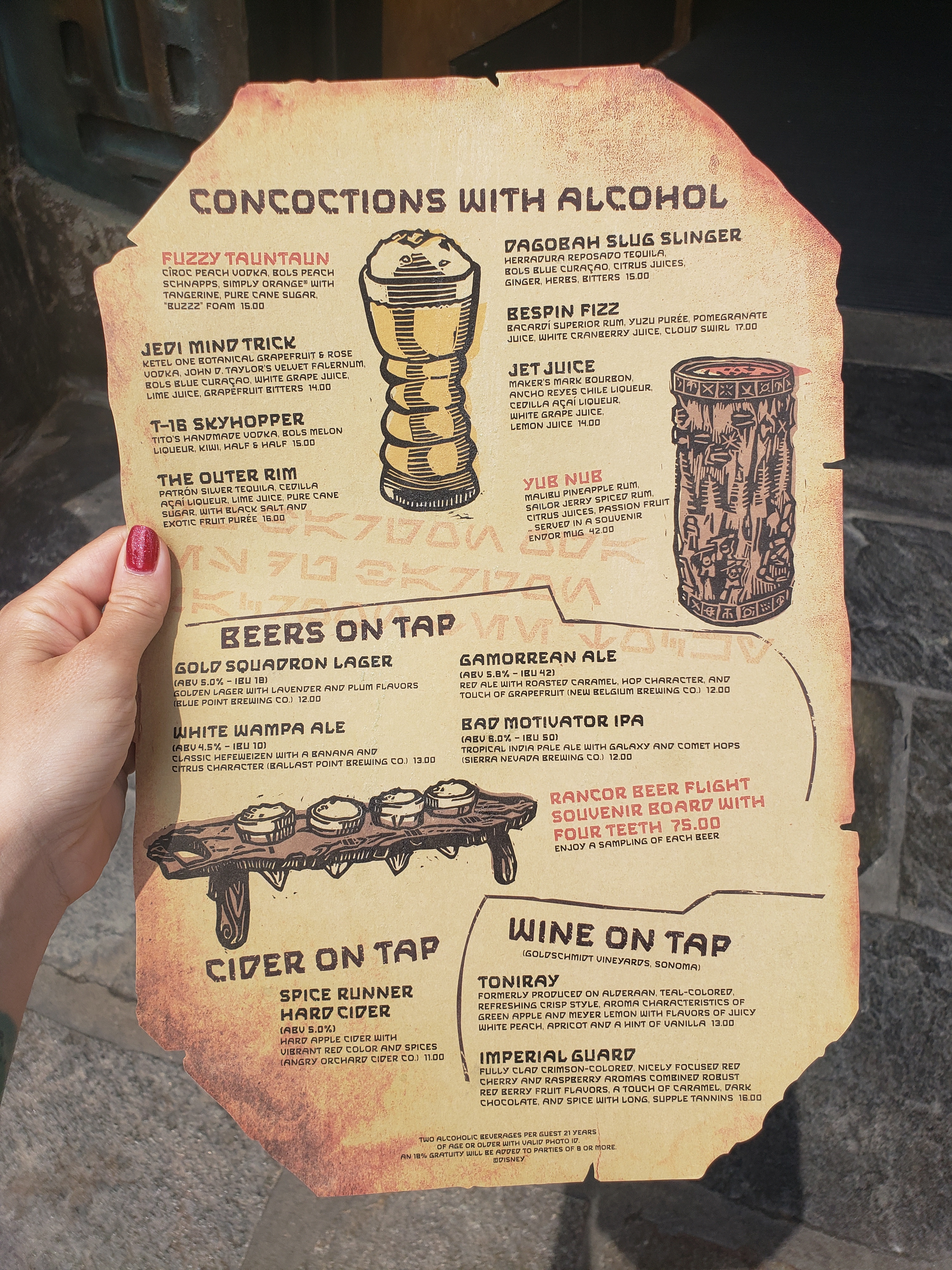 And here is a rundown on the ingredients in each. Many of them have Popping Pearls, and I had the cast member check on the package. She wouldn’t bring the package for me to take a photo, but I asked for the brand, and it is the same Tea Zone/Lollicup brand that makes the popping pearls at Bing Bong’s in DCA and elsewhere in the parks. I have a photo of those, please see my entry on vegan options in DCA for that photo. They are vegan as far as I can tell; the only strange ingredient is the calcium lactate, but as far as my research can tell me, it is vegan. It is the calcium salt from lactic acid which is typically made from beet sugar. More info on that here and here. So I would say that these Popping Pearls are all vegan.

So, after all of that, I ordered the Carbon Freeze! It has that dry ice effect going on and it makes the Popping Pearls very fun to watch. It’s a pricy drink for what it is, but it is fun as a reason to sit in the cantina and watch DJ Rex for a while. 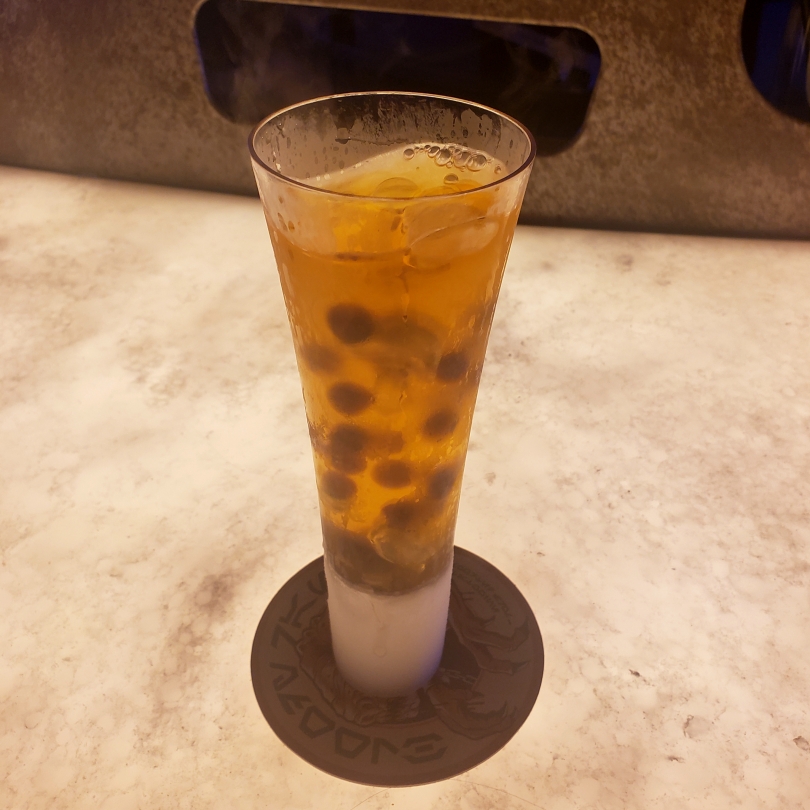 Here they have the Outpost Mix Popcorn. The popcorn itself is popped in coconut oil (and not butter, just like the regular popcorn throughout Disneyland and DCA), as indicated on the menu board: 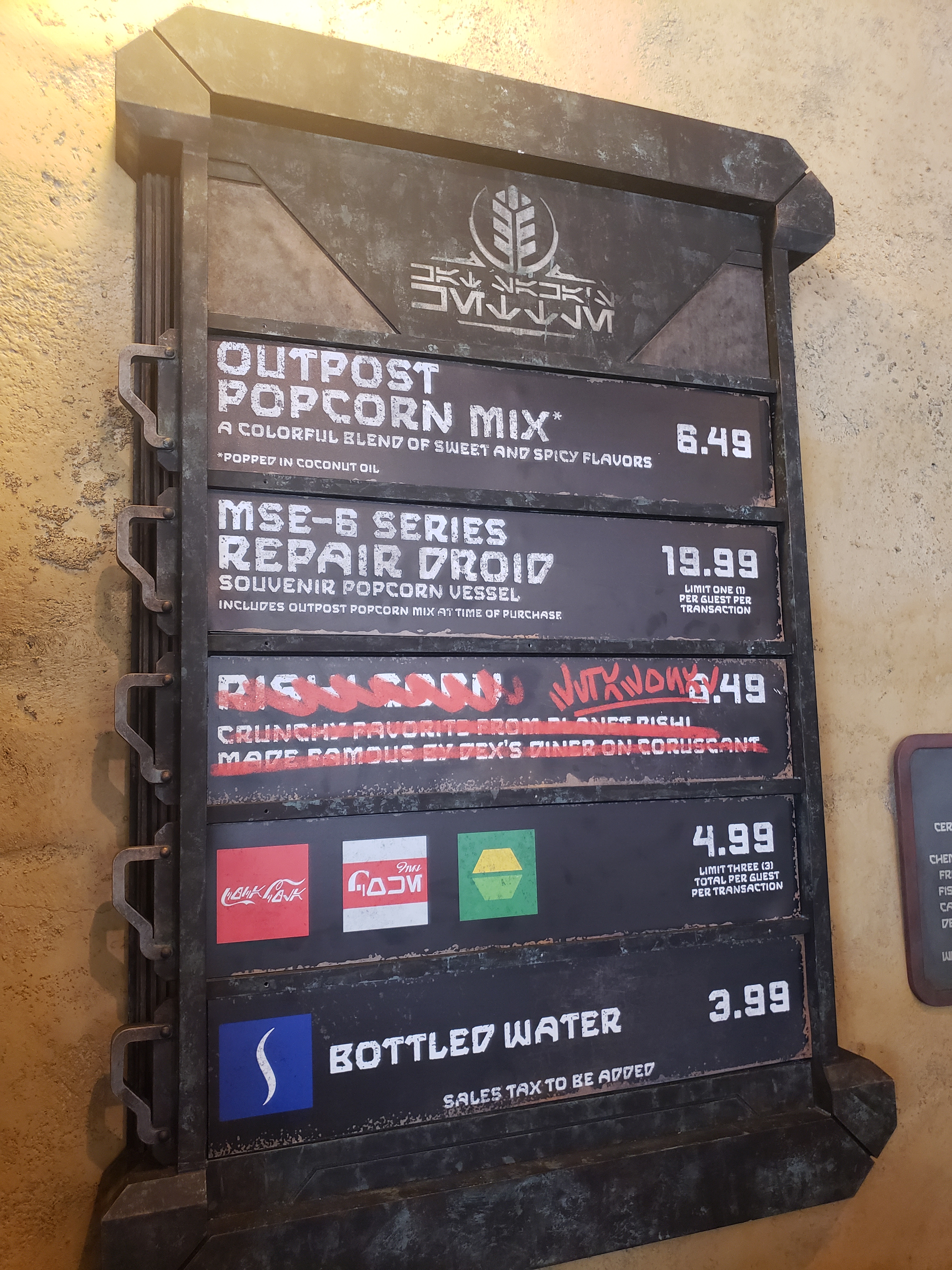 So you can see that there aren’t any obvious animal products in there. The dyes are not derived from insects; they are derived from coal. There are various issues with food dyes; please read up on them if you like. Avoiding all instances of food dyes and “natural and artificial flavors” in real life goes beyond the realm of “possible and practicable” (see the definition of veganism from the Vegan Society) for most people I would say. For example, if you’re going to boycott dyes and “natural flavors,” that also means that the blue milk described above, the Dole Whip, and many many otherwise vegan foods at Disneyland would be off-limits. Also, boycotting these kinds of accidentally vegan foods because of an ambiguous issue like this will not help animals in my opinion, so I would say that this popcorn is vegan. 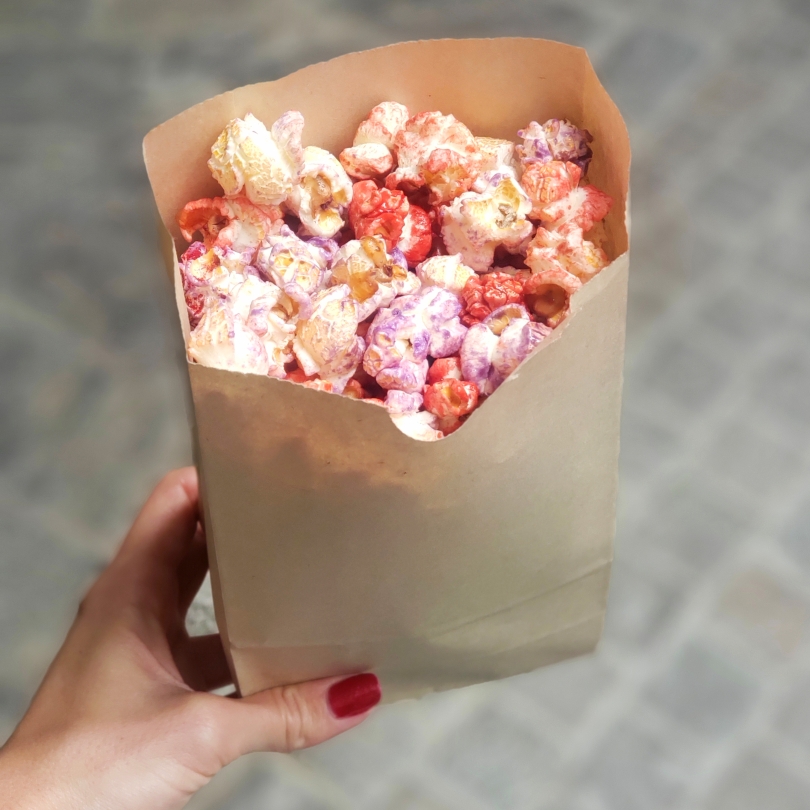 As far as the taste goes, you can probably tell from the names of the glazes that it is a mix of sweet and spicy. I thought it was very tasty, I really enjoy that kind of sweet/spicy combo, but it wasn’t something I feel like I must get every time.

This place is not very vegan friendly at all, but it’s just a snack location, so I guess you can’t expect too much. Hopefully they will add a vegan option in the future. They have the same Overnight Oats with yogurt in them for breakfast, and then various wraps for breakfast and lunch/dinner, but they all have meat and can’t really be veganized. They do have three speciality beverages that are vegan, though:

That’s going to do it for this update! Next I will be updating my Comprehensive Guides to Vegan Options in Disneyland, DCA, Downtown Disney, and the Hotels, so keep an eye out for those in the very near future. The last entry was March 2019 and quite a few things have changed since then.

Please let me know if you have any questions or if you found this guide helpful in planning your trip! And tag me on Instagram, @happiestveganonearth, in all of your delicious food photos!

Thanks for reading! Until next time, see ya real soon!