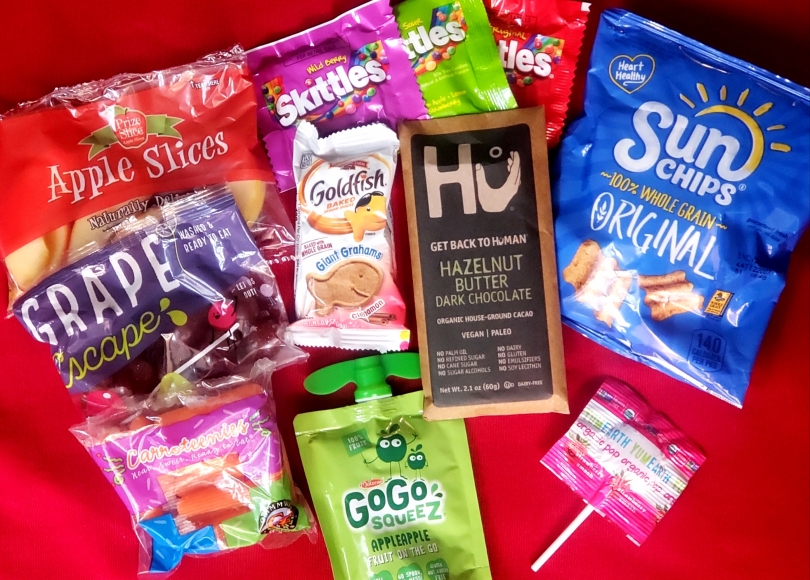 Last night we went to the Oogie Boogie Bash, which is the new version of the Halloween Party for this year! It is in California Adventure now, as it was many years ago when it first started, but for the previous several years it has been at Disneyland.

The Oogie Boogie Bash consists of Trick or Treat trails, special (villain) character meet and greets, special entertainment offerings like the Frightfully Fun Halloween Parade, a new version of World of Color called Villainous, Villain’s Grove at the Redwood Challenge Trail, a show in the Disney Junior Theater called Mickey’s Trick and Treat, a show in the Hollywood Backlot called DescenDANCE, and lots of Halloween decorations.

It is a separately ticketed event. You can read more details about tickets, pricing, etc. here.

Below is a rundown of how the Trick or Treat Trails work. Please note that this is a very different system from the one they have at Walt Disney World in Florida. In Florida, they give you allergy tokens/an allergy bag upon request, and then you get Enjoy Life treats. There is nothing like that here in Disneyland in California. Every year, I ask cast members at City Hall and Chamber of Commerce specifically if this system has been implemented here at Disneyland, but it has not yet, so we are still on our own to scout out the vegan options without the allergy system.

There are 10 trick or treat trails, and 5 of them feature a live character with whom you can interact. They’re not photo op’s with the characters — the characters are on a stage separated from the guests — but you can talk to the characters and take pictures of them by themselves. Here are the locations:

At each trail, there are 3-4 bins full of candy and other treats. My general strategy is to go to the first bin and ask the cast member for the “allergy-friendly treats” and see what they come up with. Sometimes they give you something, and sometimes they direct you to another cast member who can give you something or go find something for you. Each trail has very different options, so you can’t go to any particular trail expecting to find something specific. The allergy-specific treats that we were offered were all vegan, except for some gummy bears that had gelatin in them. Here is what we were given at the various trails: 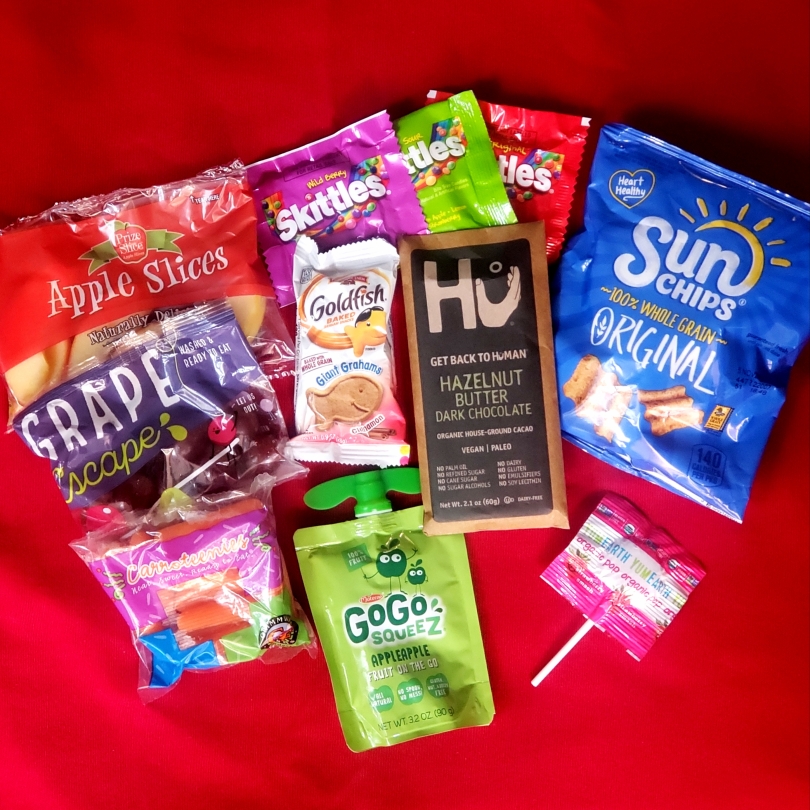 Above you just see one of each, but of course you can get multiples of all of these when you go through the various treat trails.

That last one, the Hu Kitchen vegan chocolate bar, was a very pleasant surprise that a cast member at the trail near Jumpin Jellyfish came up with. It is a very high end chocolate bar, not only vegan, but fair trade as well. We were only offered this at one of the locations, and I have no idea how many they have, but you can try your luck and ask for it. I would recommend using the words “allergy-friendly” and “dairy-free” to get the cast members to understand you and bring out the special treats quickly. It can be quite hectic with a lot of people behind you as they try to move the line along.

We also did the Dining Package at Wine Country Trattoria that gets you a reserved spot to watch the Frightfully Fun Parade. You can make a reservation here on Disneyland’s website.

It’s a prix fixe menu of $50 per person. Here are the menus, both regular and allergy-friendly: 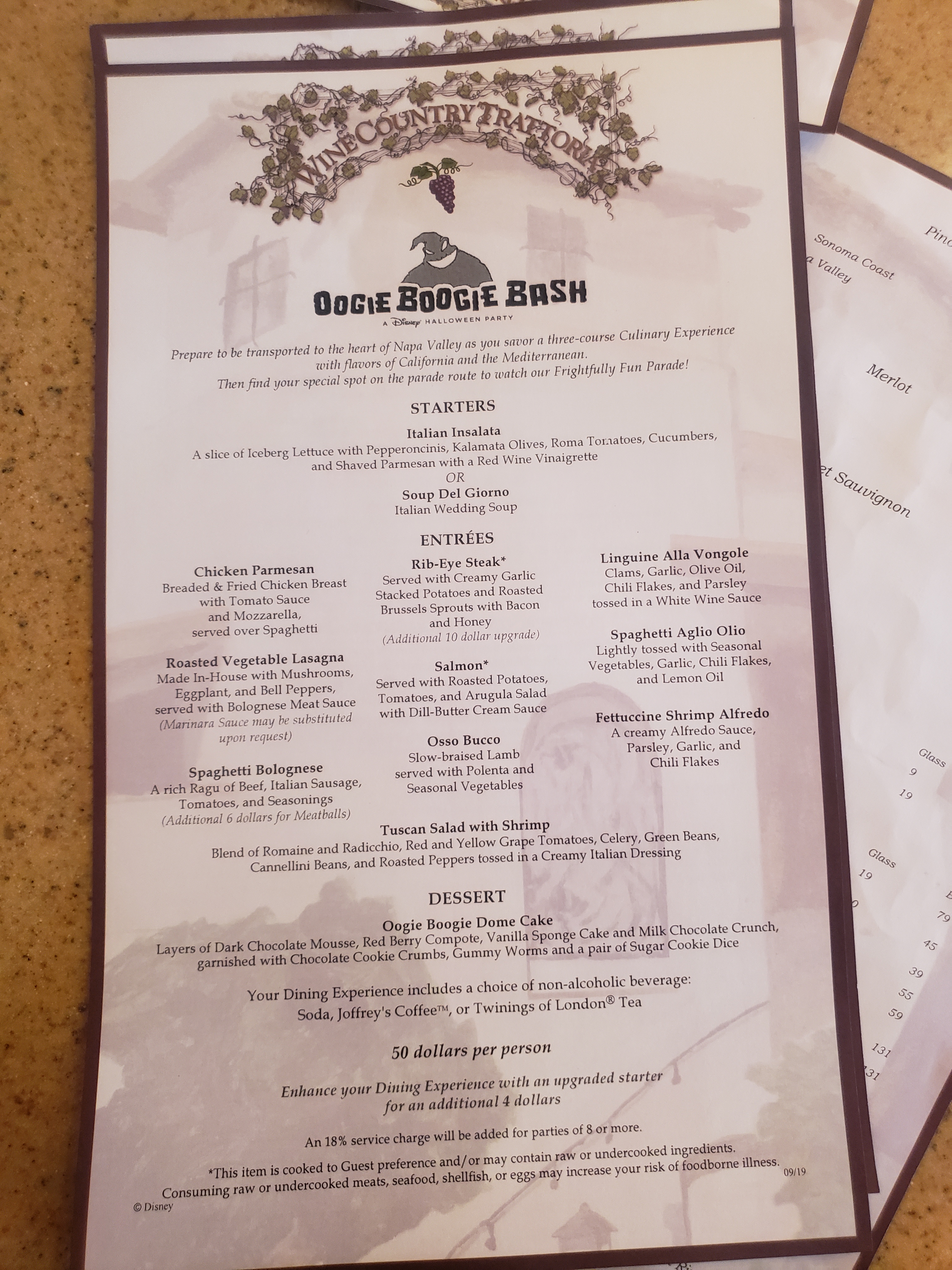 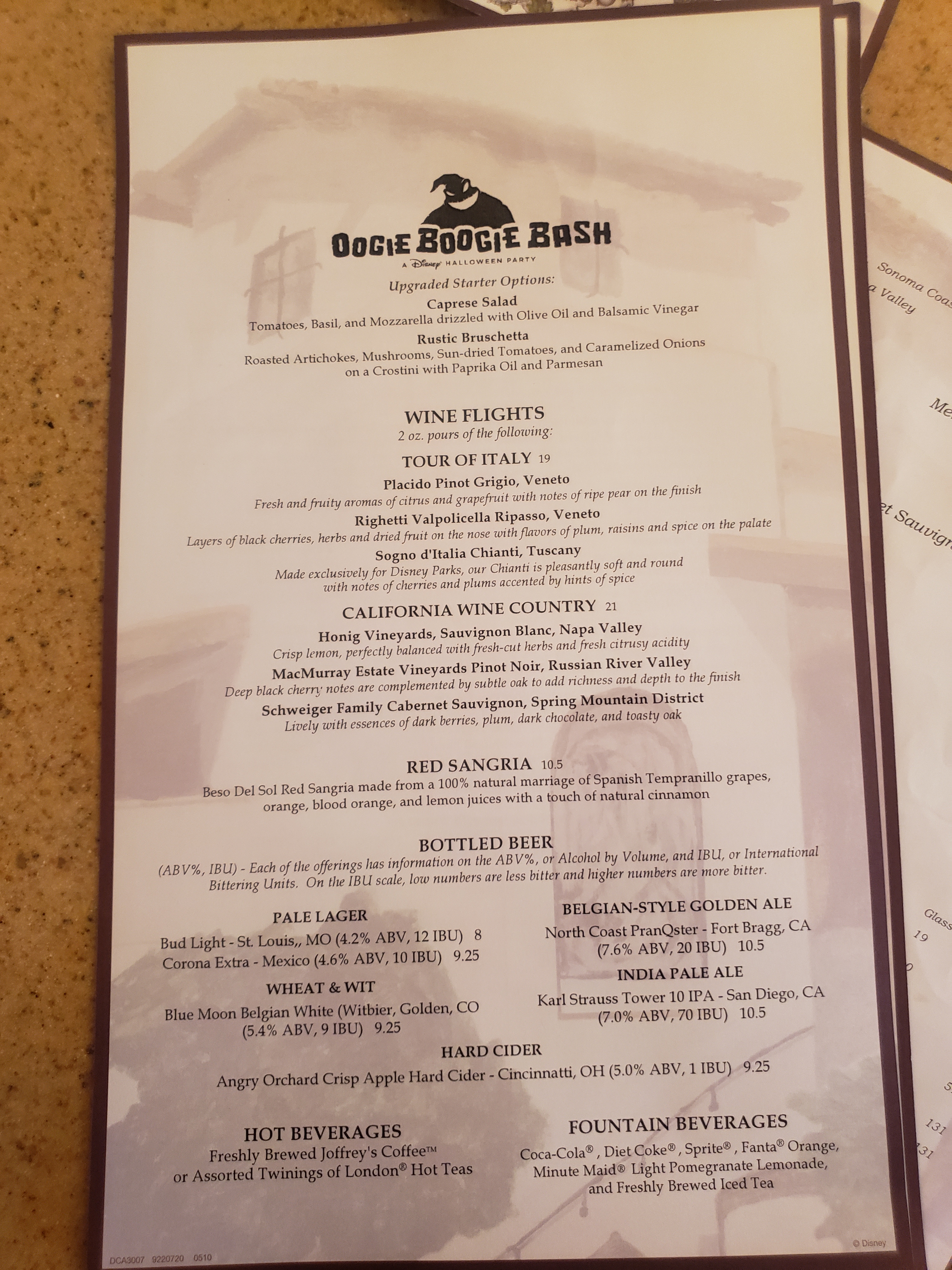 It’s basically the same as the regular menu at Wine Country Trattoria. If you’re unfamiliar with their regular menu, you can read about that in my comprehensive guide to eating vegan at DCA.

They bring out complementary bread before the meal. The usual bread they bring out isn’t vegan, but they can bring you out a vegan French bread upon request:

Our starter was the Italian Insalata. Omit the cheese and switch out the dressing — it normally comes with a red wine vinaigrette, which our server said had honey, so they did a regular olive oil/vinegar dressing:

They have one entree that is vegan with no modifications, the Spaghetti Al Oglio, and they can also make you a version of that with mushrooms as well. The Mushroom Bruschetta is vegan when you omit the cheese, so basically what they can do is use those same bruschetta toppings with the pasta. 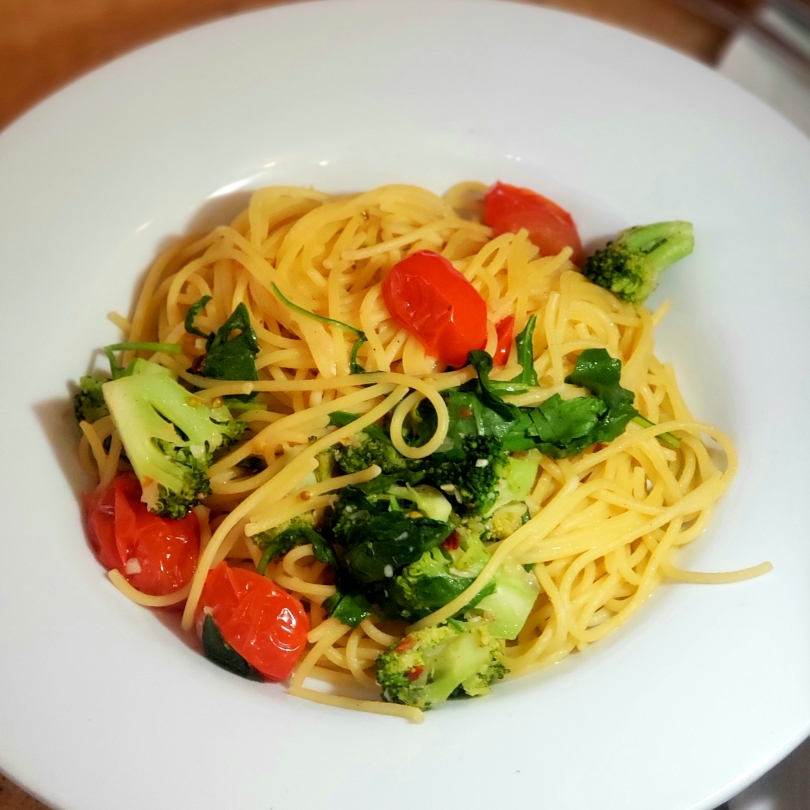 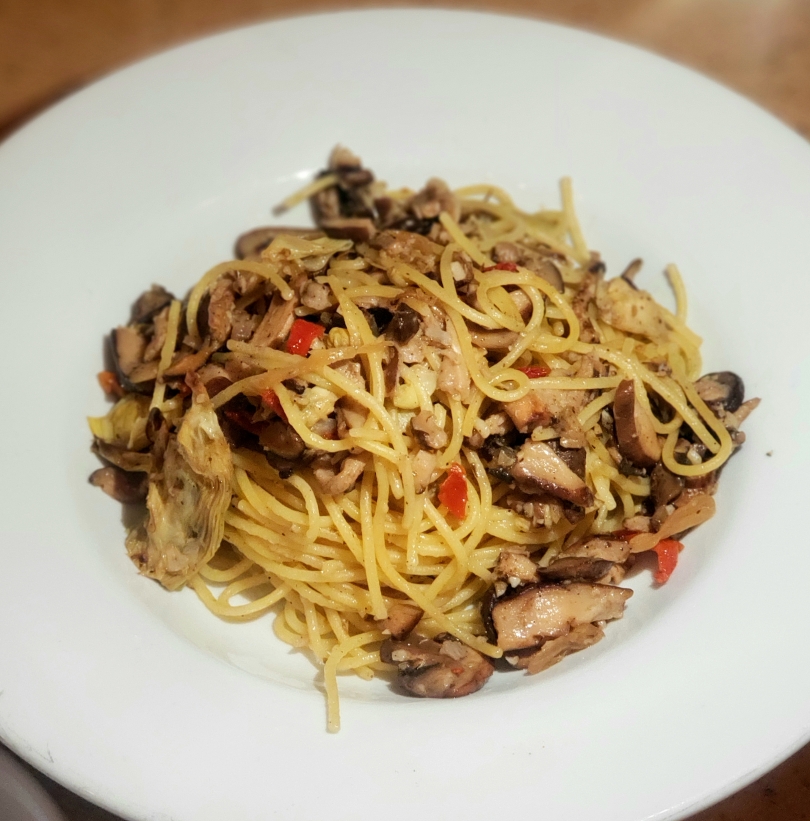 I’m a fan of the classic version, but the mushroom version was much better in my opinion. It had lots of garlic!

For dessert, they gave us a raspberry sorbet: 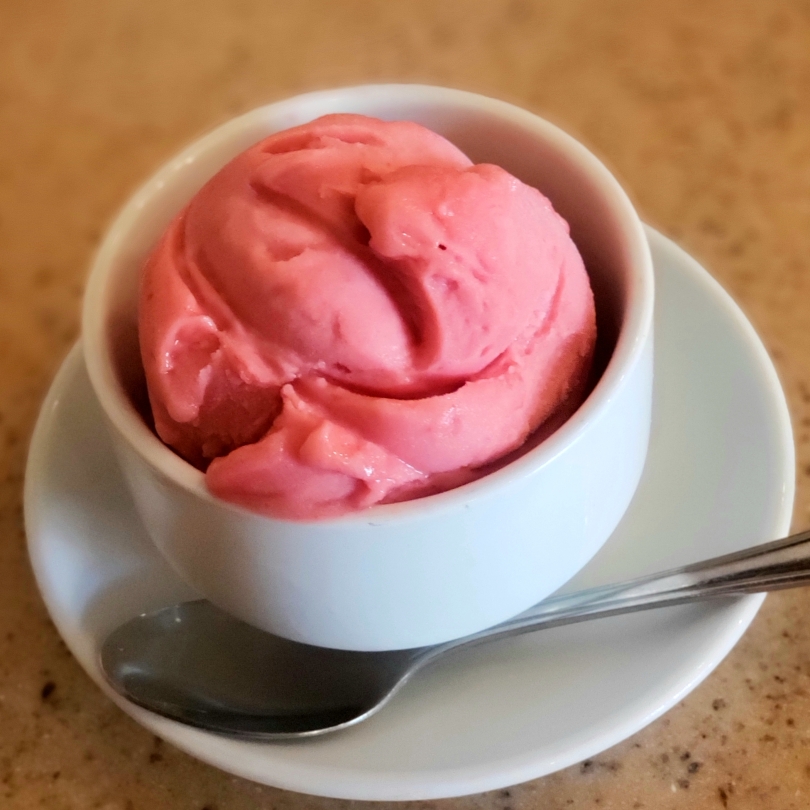 Then they gave us these passes for a preferred viewing area to watch the parade:

The area ended up being in front of the Blue Sky Cellar. It was just an area, there weren’t any chairs. I was under the impression that there would be chairs, or that we could arrive closer to the start of the parade and still get a great spot, but it was really just a regular area. I feel like if we had gotten to the parade even just 15-20 minutes before it started, we could have gotten a better spot. The food was delicious, but for $50 a person, I would have expected a more reserved spot for the parade, like with a specific chair, like they used to do for Paint the Night in front of Carthay Circle. I probably wouldn’t recommend the package — I would say, if you want to eat at Wine Country Trattoria, go ahead and do that and pay the regular prices, which are cheaper than $50 a person, and then arrive a good 20 minutes to get a good spot before the parade. I don’t think the dining package helped us get a better spot at all.

There is so much more to say about the Oogie Boogie Bash, but I’m keeping it focused on the food here. Whether you find it worth it will depend on many factors such as how much you enjoy character meet and greets, whether it is important to you to see the special entertainment offerings such as the parade and the Villainous World of Color, etc.

I hope you found this entry useful! This is only for the food items that are specific to Oogie Boogie Bash, during the party itself. There is of course a whole Halloween Time menu that has many vegan options on it at various locations throughout Disneyland and DCA. You can read all about the vegan options on the Halloween Time menus in my post from a couple of weeks ago.

Please tag me on Instagram, @happiestveganonearth, so I can see all of the vegan Halloween foods you are finding!

I hope you have a great Halloween Time this year! See ya real soon!